The Pandemic in Pictures

An American suburb revealed during six months of dog walks

It began out of boredom. When the pandemic shut the country down in March, I quickly became stir-crazy. Walking my best pal Desi to and from our favorite squirrel-chasing destination (Augsburg Park) near our home in Richfield, Minnesota was about the only exercise I was getting (like almost everything, my gym had closed).

But that routine was getting old. To shake things up, I thought to myself, “Hey, now’s a good time to really get to know good ol’ Richfield.” All seven square miles of this rectangular-shaped, first-ring suburb of Minneapolis were ripe for exploring. END_OF_DOCUMENT_TOKEN_TO_BE_REPLACED

Tim Kriz was out delivering mail on August 10 when the sky first began to darken. A postal worker in Cedar Rapids, Iowa for more than a quarter century, Kriz isn’t afraid of a little rain interfering with his route. But on this day, he soon encountered a storm that would have trees bending and branches flying—culminating in a heavy horizontal downpour.

“I couldn’t see my hand in front of my face,” Kriz remembered.

Too far from his postal truck to run back for safety, Kriz crouched beside a house to protect himself and the bundles of mail he was carrying. The resident inside the home banged on her window and called to him, “Would you like to come in here?”

“It’s been 25 and a half years now and I have never gone into a customer’s house to wait out a storm,” Kriz remarked. “That changed on August 10th.”

Kriz was welcomed by a young woman who told him she was studying to become a chiropractor. The two watched from her living room window as 60-year-old trees slammed to the ground, fences flew down the street, and the front doors of neighbors’ houses swung open and shut with a loud crack.

After 45 minutes, Kriz finally opened the front door, took a look around, and thought, “This looks like a war zone.” 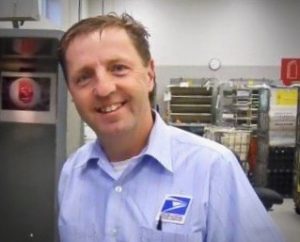 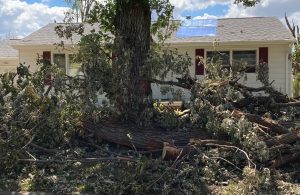