Even Career Pros Should Push for $15 an Hour Minimum

Even though I’m a 34-year-old, college-educated, professional white woman from a middle class Midwestern home, I’ve had plenty of experience with minimum wage jobs. And they haven’t been relegated to my teenage or college years. In the last decade alone, I’ve waited tables and tended bar at a number of establishments.

In fact, I was holding down yet another part-time restaurant gig to help make ends meet last November when a young man holding a clipboard knocked on my door and asked if he could speak to me about an organization called 15now.org, and about getting behind a movement to raise Minnesota’s minimum wage to $15 an hour.

Serendipity? After the election, this was the cause I was planning to get involved with, and here they were at my front door.

To better explain why this movement is important to me (and should be to you), both here in my home state and throughout the U.S., let me take you quickly through my own career trajectory. I want to be clear: not everyone who makes minimum wage spends his or her life toiling in fast food or janitorial work.

I’ve made a humble but practical living as a musician from the age of 19, starting while I was studying jazz music at the University of North Texas. I spent five years as a professional vocalist, writer, arranger, and lyricist in the Dallas-Ft. Worth metro area while I was obtaining my degree. I moved to New York in 2007, and after a couple years working the freelance circuit, I wrote and produced a solo record of original jazz/pop songs, but never really loved the independent artist life of bad pay and groping fans. I saw the music industry trend of digitizing and downsizing, and since backup singing gigs for innocuous-looking white women weren’t exactly falling off the bush, I jumped at an opportunity to build my own curriculum and teach at a private secondary school in Idaho—all the while cultivating ideas and a knowledge base to prep me for my next chapter, starting my own small business: Entertainment Jill.

So far so good, right?

Yet at the age of 30, I moved myself, my cat, and my meager teaching-salary savings across the U.S. again, this time into my folks’ basement in their home outside of the Twin Cities. There, I holed up, creating a new website, learning about branding, marketing, the digital production world, voice over, and audio production. It took about six months for the savings to run out, and by that time, I’d realized that getting paid a living wage as a performer in Minneapolis was a tough nut to crack. No one was calling for gigs, and I still had bills to pay each month, including my commitment to fund start-up expenses for my business without loans.

So, it was time to polish up the bartending shoes. 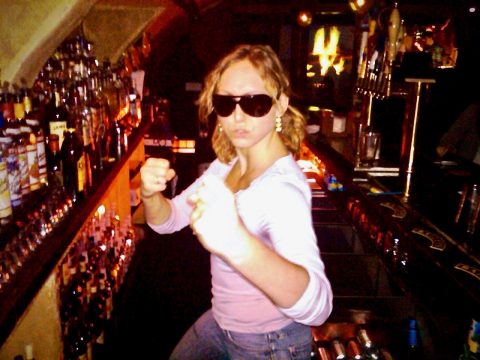 Calley Bliss at one of the bartending jobs she worked in her 20s while living in New York City.

I got a job at a small bar through a large corporation at the Minneapolis/St. Paul International Airport. I thought it’d be fun, I’d get to meet interesting people, and from my experience working at various venues in Manhattan and Brooklyn during some lean New York years, I knew you could make decent money in a relatively short amount of working hours, allowing me to keep my business efforts alive.

But then, the traffic to my part of the airport died significantly due to the winter travel slump. And one day, donned in tights, a black pencil skirt, a starched button-up shirt, and black tie, I found myself scrubbing the dirty bar floor and coolers per my manager’s request. I was making $9.00 an hour, the then large-employer-minimum-wage rate in Minnesota.

The conversation in my head that day had two beasts, and they were both ugly.

Beast number one was irate. I was a college graduate, whose professional career had included managing staff and events for multi-million-dollar productions, performing for crowds across the U.S. and beyond, building the curriculum for classes and an entire department, and acting as production manager for various recorded and live projects.

Beast number two was ashamed and humbled. Who was I to think that I was above this work? Hadn’t my parents raised me to be a good, hard-working Midwestern woman? All my co-workers were in the same boat. Many of them didn’t have my level of education, but most of them had families to support, and I didn’t see them complaining.

I took home less than $100 in tips total during that week of floor scrubbing, and made similar amounts in the weeks that followed. And then, something clicked.

I’d always been liberal, believed in social services, in helping those less fortunate, etc. But I was suddenly and glaringly aware of how impossible it is to live any kind of trauma-free life on our current minimum wage. And I was one of the luckier ones, not tasked with having to pay for children’s educational needs or special health care costs (anymore, but that’s another article for another day). I spent many months thinking about finance, and the value given to certain jobs and titles based on trends and history.

What does it say about our country when we expect everyone, no matter their educational level, to somehow live a healthy, productive life on $9.00 an hour? The ugly side of economic inequality and democratic complacency made its way deep into my heart, and sat there, brooding.A year and a half later in the fall of 2016, I’d managed to move out of my folks’ home and I was living in a duplex with a partner. I’d been working with a local voice talent agent for two years, landed a voice over gig promoting Lucky Charms cereal, and managed to cultivate some of my own work for Entertainment Jill through various online platforms and connections. Progress, right?

But I was also teaching yoga part-time and working at another bartending job, again for minimum wage. And that’s when 15NowMN knocked on my door.

I went to my first info meeting the next week. A few weeks later I went to a larger meeting. I was motivated and excited, anxious to do as much as I could to foster this effort, and I volunteered to help with the organization’s messaging efforts.

In the spring of 2017, 15NowMN, Entertainment Jill, and video animator Alexander Jensen released a two-minute animated video explaining the urgency for Minneapolis residents to get behind the $15 minimum wage. The video received 13,000 views. The movement was taking hold and gaining momentum.

Then in June of last year, the Minneapolis City Council voted to pass a $15 minimum wage, implemented in stages by 2024, and I had the opportunity to work with the same team to create this celebration video for social media.

Starting this month (January 2018), the first big change comes as large businesses in Minneapolis are all required to raise wages 12 to 15 cents to $9.65 and hour and small businesses must now pay employees $7.87 an hour. The climb to $15 an hour will take about four years. The deadline for large businesses to reach it is July 1, 2022. (Smaller companies have until 2024.)

Next up, 15NowMN has turned its attention to Minneapolis’ neighbor to the east, St. Paul. The group has called on the city’s new mayor-elect to pass a similar citywide minimum wage increase by the end of next summer and he supports the idea. Some 40 percent of the residents in St. Paul are living below the poverty line, the highest percentage in the region; many workers are forced to look to taxpayer-funded public assistance programs to get by.

Of course, there’s plenty of opposition. The Minnesota Chamber of Commerce sued the city of Minneapolis, arguing it didn’t have the power to set a minimum wage that differs from state law. Last month, a judge denied the chamber’s request for an injunction, but at least one other Minneapolis company is continuing to fight the hike in court. (Although Minnesota recently increased the statewide hourly minimum wage from $6.15 to $9.15, that’s $5.85 too little.)

In addition, new corporate rumblings indicate some Minneapolis businesses are planning to cut back on employee benefits to offset the increased wages. And some restaurants say they’ll have to raise prices by more than 20 percent in order to give servers the $15 an hour wage. They want tipped employees to be exempted from the new wage hike, keeping them at $9.50 an hour (plus tips).

And so, the debate continues. As we all know, the world runs on money. It’s the foundation for living in an active society. As someone who’s had her fair share of sobering firsthand experiences with the reality of minimum wage, fighting for $15 put a swell in my heart. For those of us who’ve worked scrubbing hard floors on our knees, we deserve to stand up on some solid financial ground.

Calley Bliss can be reached at entertainmentjill.com 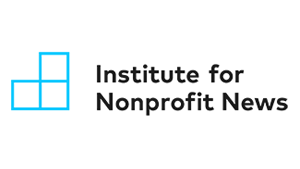