Out of the Mouths of Babes

The Reporters Inc’s Kim Whiting recently interviewed nine teenagers from the Tulsa, Oklahoma area to find out how aware and affected they are by the current state of America’s politics. They come from a mix of ethnic backgrounds, from mostly middle and upper-middle class income households, and live with parents who have both liberal and conservative political points of view. (Most of these interviews were conducted prior to the current Coronavirus (COVID-19) crisis.)

Kim concludes, “If their responses are indicative of teens nationwide, then the general consensus of our youth is that we adults need to chill out, grow up and do what’s right.”

Our kids are so disappointed in us.

If you’re over 50 I’m betting that, like me, political obliviousness was one of the hallmarks of your childhood. In my earlier childhood, there were Vietnam protests (my dad did two tours of Vietnam) and Watergate. I was aware that these things were going on, but the emotional heat of them didn’t reach me. My youth was cool and politically carefree. Though my mom was active in the The League of Women Voters, I saw politics as an adult thing, something dull that I didn’t need to concern myself with until some distant future—if ever. Until adulthood, I wasn’t even certain of my parents’ political affiliations. Most kids of my generation were busy playing, learning, socializing, developing—doing the things kids are supposed to be doing. Most of us didn’t really care about politics. We didn’t really have to.

Today, my kids (and likely yours as well) aren’t getting the politically carefree childhoods the majority of us had. With mass media, kids plugged into the internet, and the super-heated political divisiveness in our country, politics is “in your face” and difficult for our youth to avoid. They’ve been pulled into the political trenches with older generations and many are already battle-weary.

The political issues themselves are also difficult for kids to ignore. For perhaps the first time in U.S. history, most of our big issues impact our children—or will soon be impacting them—more than the rest of us. We have saddled our children with underfunded schools, exorbitantly priced college, a culture of gun violence/school shootings, national debt, expensive healthcare and most stressful END_OF_DOCUMENT_TOKEN_TO_BE_REPLACED

Filmmaker Reflects on Success of His Oscar-Winning Animated Short

Matthew A. Cherry, an NFL wide receiver for the Jacksonville Jaguars, Cincinnati Bengals, Carolina Panthers and Baltimore Ravens, retired in 2007 to pursue a career in entertainment. Thirteen years later, Cherry found himself at the Academy Awards last month, accepting an Oscar for Best Animated Short Film. Cherry returned to his hometown of Chicago later in February to speak at a Black History Month celebration hosted by Macy’s. The Reporters Inc.’s Rashanah Baldwin chatted with him before the screening of his 2020 Oscar-winning Hair Love. Cherry is credited as the film’s writer, co-producer, and co-director.

Rashanah Baldwin: How did you come up with the idea for Hair Love? What was your inspiration for making a film focused on Black fathers doing their daughters’ hair?

Matthew A. Cherry: I’ve always been into stories that focus on the small moments that I think a lot of people overlook. Back in 2016, I came across this really touching image of a father with his daughter sitting in his lap and she’s looking up at him with so much love. She had Afro puffs and that image just really inspired the idea. I then sent out a tweet trying to really get the story going, and for whatever reason, it didn’t work out. But then a year later I kept coming across these viral videos of Black dads doings their daughters’ hair, and I was just like, “if ever there was a sign that now is the time to move on this idea, you know this is it,” so we did the Kickstarter (crowdfunding) campaign in July 2017.  The original goal was to raise like $50,000 to $70,000. We ended up raising over $300,000 in 30 days. There’s just been magic on this project ever since the first day, and it’s been crazy to see this whole journey kind of culminate with the Oscars. 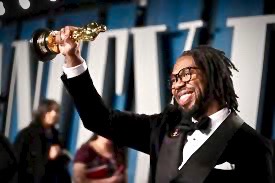 Matthew A. Cherry celebrates his Oscar for Hair Love in February.

RB: That’s a huge accomplishment! What’s kinds of responses from Black fathers have you received?

MC: When you look at mainstream media, you would think that Black dads aren’t present in their kids’ lives but studies have actually shown that Black men are among the most involved in their kids’ lives even if they’re not married to their partner. So, definitely there’s been a lot of love from fathers who’ve said “thank you for seeing us, we try just as hard as anybody else does, END_OF_DOCUMENT_TOKEN_TO_BE_REPLACED